“Nice Mullet!” It was a phrase I would hear often throughout the night and I was starting to feel like I did indeed look good in my 1980’s style mullet. When I look at the pictures I do not look good, not hardly. I look like an oversized brown man wearing a wig that sort of resembles a chickens ass. Yep, that’s it, I look like I have set a chicken on my head – backwards. 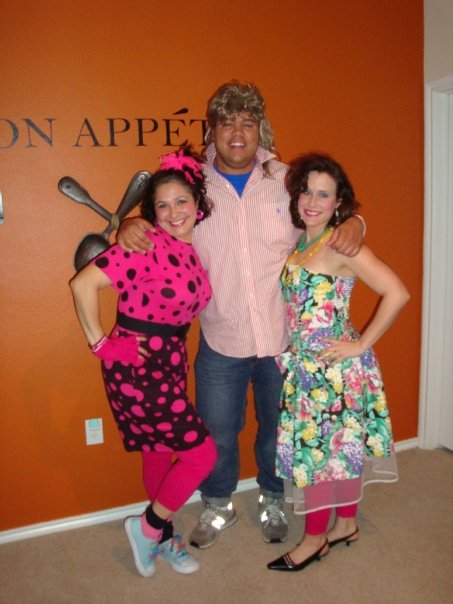 We started our evening at Babe’s Chicken Shack in Frisco and then we headed over to this 80’s party where we happened to be the youngest people their by at least a decade or two. A few of the ladies were so old that they looked like old versions of Joan Collins or Phyllis Diller.

My friends and I stayed on the dance floor pretty much the entire night and I was surprised that this was supposed to be a “Singles” group. What it should have been called was “Midlife Crisis” group. I don’t mean to hate but once you have already had kids, they have gone to college and you suddenly find yourself out on the curb because you were part of a singles group and your wife found out, well, then, maybe you shouldn’t be going to 80’s dances. I mean, your hip might fall out or you might have a heart attack and then where will you be? Divorced and disabled you won’t have a chance at restoring your relationship with your frigid ex nor forming “everlasting” love with a new P.Y.T.

After the dance that ended at a jr. high 10pm there was an after party at some Irish pub. We popped by for a few minutes and found the music miserable and the crowd about as pleasing as flat beer and a bowl of picked over pretzels.

As we were leaving this attractive lady stopped us and said, “Where are you guys going?” We were like, “OMG, that party was like totally, last week, and like, you know, like, we had to just get out of there.” Okay, we didn’t talk like Valley girls, but we should have. The lady said, “Well, I’m a little older than ya’ll so I’ll just mosey on in there and see if it will be fun.” We told her that was a good idea because secretly we knew that she was in little danger of being pawed at or picked up because for most of these guys it was way past their bedtime.

When the night was over I realized that I did have a great time. It was like being a kid again and your parents are having a big adult party and you get to sort of hang with the grown ups. Everyone is mature and civilized and you don’t have to worry about things getting out of hand.