Fame! I wanna live forever! I wanna learn how to fly!

I’d sit in front of the television back in the 80’s and watch rapturously as the screen was filled with people wearing polka-dotted shirts, leggings, scrunchies, tight jeans and jean jackets. This song, these dancers, they spoke to me. Dance is the body’s way of interpreting music and although I couldn’t play any instruments, dance was something that came natural to me.

I have to say that all my life I have felt like a 5′ 11″ man trapped in a 6′ 5″ body. I’m too big to be a dancer or a gymnast, but these are things that I loved growing up. Some guys grow up loving football and sports. They trade baseball cards and play catch with their dads. I preferred to dance. I loved Michael Jackson and parachute pants and although I didn’t grow up with MTV, I was aware that somewhere out there in the world there were people who really danced.

When I was little I always felt like someday I would grow up to be famous. Does everyone feel that way about themselves? What would Freud or Jung say about this feeling? Who knows, what I do know is that as a kid I always felt special and even now when I watch people on stage, I don’t just think, “I could do that” I know I can – and sometimes I do.

For me dancing and performing aren’t about Fame or Remembering My Name… but rather something that is a part of me, like breathing. In order to exist I have to dance. When I hear a great song I envision the choreography for the video. I see a backdrop for a scene, a stage, the lighting and then I imagine myself or someone else dancing to the beat.

When I was a kid I always loved the show “Fame” and when I saw that it was being turned into a movie I was so excited. However, the movie was sort of a let down. There wasn’t much of story line and the ending was sort of anti-climactic, but it did have some nice dance scenes and some great songs mixed in. Perhaps I had my expectations set too high by films like “You Got Served” and “Step Up 1 and 2” but this movie was so close to being good, it just never picked a direction. Instead it did what many of us do in our lives – we try multiple paths and directions hoping to be good at everything instead of being the best at one thing.

What is it about online dating services that makes me feel like I am bargain basement shopping? It’s like I have this selection of women served up before me that are last year’s models or returned items that someone else didn’t want. I know what you are thinking: Harsh Much! But it’s true.

I’ve been trying Match.com for a month now and it seems that everyone they are matching me with is divorced. When did people start getting divorced in their twenties?

I’m probably being too judgmental or even unrealistic cause I know there are some amazing divorced women out there, but I sort of want to be my wife’s first husband. When someone has already been married then I feel like “Hey, you already had your turn, let some the rest of us have a shot!”

Match.com gives me 5 new matches a day and most of the time I can look at their profile and tell if we would actually be a good match. I have talked to a couple of girls through email and I can’t help but be bored.

One girl said, “It’s torture for me to get to know someone through email.” And I wanted to respond back, “If that is the case, then you should give me a good reason to want to meet you in person. Be interesting. Be funny. Be witty. Charming. SOMETHING!” Snore.

I have a tendency to quickly write out a long email that gives insights into who I am and what I am looking for without coming right out and saying it. I ask important questions up front like, “Were you ever a dude?” and “Are you a Wiccan?” It’s important to get these questions out of the way at the beginning instead of finding out on the third or fourth date and you’ve already french kissed on the front steps of her lair.

I promise that I am not hardened or set in my ways, but the last 4-6 relationships, the girls I took out from e-Harmony, Wilbur Smith novels and the 33 years I have lived on this Earth have wizened me and enhanced my bullcraptometer.  Online dating services allow people to put their best foot forward on an online profile but I think it also attracts people that fall into these categories:

I’m sure that makes me sound jaded, but I’m just drawing a conclusion based on my own personal experience and observation. But I also believe that in every field full of weeds you can find a beautiful wild flower… Somewhere in this great wide world there is a woman who will understand my heart and see me for who I am – flawed, but awesome.  She’s out there somewhere and I plan to find her.

It started as a kid… I was a huge fan of Wolverine and of course Flash and the Incredible Hulk, but everyone’s favorite had to be Wolverine.Wolverine was the rebel, the bad ass, the first one that always wanted to launch in and attack instead of thinking things through. Who doesn’t love a rebel? 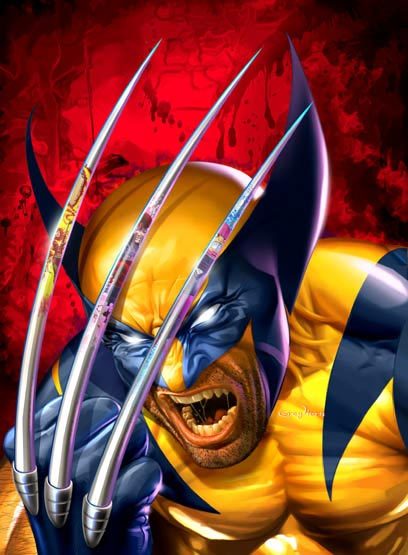 After seeing Australia and of course the latest X-Men installment: Wolverine, I have to say that the movie with Beyonce and Ali Larter – Obsessed, is loosely based on me stalking Hugh Jackman/Wolverine. Seriously.

I wasn’t a huge fan from his first X-Men appearances, I mean, he was cool and all, but his weird hair and chops made him seem more cheesey than cool. Then I saw Jackman on the Oscars and he can be funny and laugh at himself and there is nothing cooler than a man’s man who can dance and sing. At least not for me. I think we often forget that the real man’s man can do it all. Dance, Sing, Fight, Protect, Love, Laugh, Cry… wait, I’m describing myself now.

Then here is Mr. Jackman with Beyonce:

I really enjoyed the movie and I enjoyed seeing Jackman on Oprah, I only wish he would shut up sometimes and let her guests talk. And what is with that whole “The View”- like panel? Jenny McCarthy? That Designer dude and her best friend Gail? When did that start?

My review is that this could have been a funny movie with lots of great “dude” humor, but in the end I felt like I needed a shower afterward.

Since I’ve been laid off I’ve been extremely busy. Reading books, designing websites, promoting Sound and Show, and the list goes on and on, but I can only work so much – sometimes I have to play.

Here are my movie reviews for some of the movies I’ve seen in 2009.

The best movie I have seen in the last probably 5 years. Clint Eastwood is phenomenal. Gran Torino makes you stop and think about who you are and what it means to be an American, but it also teaches you about love and sacrifice and acceptance. I am a firm believer that if everyone in the world stopped for just a moment to learn about the people around them that we could eradicate racism, ignorance and hate. Go see Gran Torino and see the messages within the message.

Never before have I been so happy to be an American. In just a couple of hours Slumdog takes you through the lifetime of 3 kids who overcome obstacles that are so unbelievable that it is almost beyond my cushy American comprehension. What I love about movies like Slumddog is that they educate and entertain at the same time.

By far the best action movie since the Bourne movies, but I think it is better than Bourne. Liam Neeson steels every scene in this action thriller that takes us on a non-stop crash course in slavery, human trafficking, and killing. At no point does this movie slow down or disappoint. The action scenes are fresh and new and even though I’ve scene every stunt imaginable, I was still impressed with some of these.

This movie is not a “feel good movie of the year” kind of flick, but the acting and the drama keep you entertained. A movie that deals with something as horrific as child molestation, lies, rumors, gossip and how those things can destroy peoples lives is something that is a hot button in the world today. Meryl Streep, Phillip Seymor Hoffman and Viola Davis all deserve Oscars for their performance in this film. It’s just plain brilliant.

Dakota Fanning and Teri Hatcher add their famous voices to this 3D spectacle, but I’m not sure it was necessary. The story pretty much carries itself and although it is a little dark and creepy I couldn’t help but parallel the story to real life. In Coraline there is this monster/spider woman that uses a doll to spy on your life and to see what you don’t like about it. Then this spider creature creates an artificial world that fulfills all your desires. This fantastical world comes with a catch, in order to stay in this perfect universe you have to give up your eyes and have them replaced with buttons. When Coraline doesn’t comply she must fight to save her life and the lives of her parents. As dark and demented as it is, the story is poignant and I recommend going to see it.

Clive Owen rarely disappoints and this movie is no exception. The story is new and somewhat timely considering that banks are crumbling all around us, but… there were a few times that this movie drags and you want them to just get on with it already. The best part of this movie is an intense shootem’ up scene in the Guggenheim Museum in New York. This scene alone makes the movie worth watching.

He’s Just Not That Into You

Jennifer Aniston, Ben Affleck, Drew Barrymore, Scarlett Johanssen – how could this movie not deliver? Well, it does and it doesn’t. If you are looking for a fun date movie then you will be disappointed. This movie is filled with mixed messages and it involves cheating and divorce and yes, while those are real life issues I just don’t like the way they go about presenting them and how people deal with them. Relationships and dating are hard and sometimes he is into you, he just doesn’t know that you are into him. Girls need to get better sometimes at sending signals and guys need to get some balls sometimes. Cause yeah, he’s into you, he just doesn’t want to get rejected for the 5000th time. But I digress. This movie I think is actually just worth renting.

Underworld: Rise of the Lycans

The 3rd movie in the series but the least entertaining of the three. The storyline is pretty weak and so are the special affects. I’d say save your money on this one.

At the dollar movies now is Australia, The Tale of Desperaux, and 7 Pounds which I’m surprised I didn’t see when they first came out.