Last night I drove down to Austin to meet Heather B. Armstrong a.k.a Dooce.  It was a treat…

When I first started working at Texas Instruments I HATED my job. I sat in one of those cubicle that only goes about 3 feet how and makes you feel exposed like you are a kid urinating at a trough with your pants around your ankles and everyone can see your buttocks – except now you are an adult and this is totally unacceptable.

Texas Instruments was a thirsty tick that was sucking the lifeblood out of me and I couldn’t help but surf the net for a little bit of an escape from my suicidal reality – and that is how I stumbled upon Dooce.

Immediately I was taken aback by this woman who was writing some of the most hilarious and sometimes bawdy tales of her life. See this excerpt here that was written before her daughter was born and after I had already been reading religiously for a while:

I’ve cleaned every surface in this apartment: every tile, every crevice, every hidden corner littered with dust bunnies the size and attitude of Texas. Alas, I’ve nothing left to clean.

I always said that I’d strip this place bare once I had the free time to do so, much like I’d strip the sleeves from Britney’s trembling shoulders if ever given the chance to hit her, baby, one more time. Two weeks into unemployment and that mission is accomplished (the cleaning mission, not the Britney mission, you pervert). Now what the hell do I do?

As you can see the language is often “colorful”, but the writing is downright creative and sometimes so hilarious that I would sputter and snort in my cubicle. I was supposed to be helping someone figure out how to double-click but instead I was finding a way to cope with that fact that my life sucked  – Heather/Dooce helped me realize that I wasn’t the only one with some serious issues and that sometimes you need to get help with those issues.

As the years went by I got to watch as Heather went through depression and pregnancy and how Mormonism has affected her life. I have read about her political views and ideas on same-sex marriage and although often times I find myself disagreeing with her it has never changed the fact that I have loved her like a sister – a far away online only sister, but a sister nonetheless.

Heather got up and read an excerpt from her new book – it was a story that we had read on her website about how it took seven months after giving birth vaginally with her first child before she was able to have sex again or what she called “Reconvening the Procedure”.

What I love most about Heather is not the hilarious side, but the softer side. I love her monthly newsletters to her daugher Leta and the times when she stops and takes a moment to express her love for her husband Jon, like she did in this paragraph:

So it feels really good to have all these emotions toward Jon that I don’t normally experience because of our proximity. I miss everything about him, even the incessant talking and bear feet. It’s a longing that is somehow invigorating, and once where I would have been annoyed that we’d talked six times already on the phone I find myself getting a text message and hoping it’s from him. I ache to get back to the hotel room from whatever I’m doing so that I can call and hear his voice. Which I am about to do right this second, call and see if he slept well, ask if I can interrupt SpongeBob to say hello to Leta, and then stop and savor this feeling of missing the weight of his body on the bed next to me.

The way she expresses her love for her family  is so genuine and intimate that it makes me, as a single dude, hope and pray to God that someday I will find a love like that.

I plan to insert a picture here later that I got with Jon and Heather. I was elated to get a picture with both of them and I hope Jon doesn’t mind me using his photo at the top of this post. I was standing right behind him when he took it and so this was the angle that I had during the hour that she spoke. 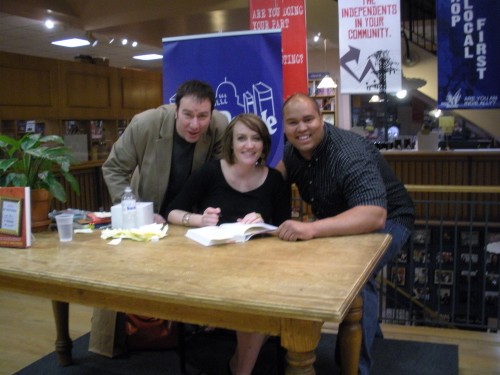 88 replies on “Meeting Heather B. Armstrong in the Flesh”

what is a good hook for an essay https://choosevpn.net/

where does the thesis go in an essay https://tjvpn.net/

write my essay for me https://vpn4home.com/

how to start an essay https://vpnshroud.com/

what is an outline for an essay https://vpn4torrents.com/

how long is a dissertation defense https://helpon-doctoral-dissertations.net/