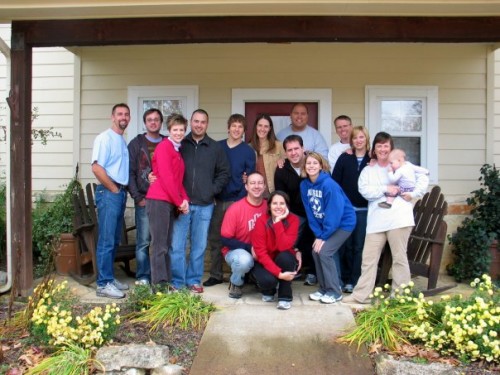 We were standing on a bridge that overlooked a large black stagnate puddle of water. The small bridge led to no where and for the life of us we couldn’t figure out why someone had placed it where they had. It was metal and only wide enough for one person to cross.  The area was remote, there was no one around except for me, Luker, DW, Jimmy and Bob. Luke and I had ridden over in a slow golf cart and the other 3 guys were on a much faster cart. My plan: To steal the faster golf cart.

I climbed up on the bridge with look and looked back to realize that if I was sneaky and fast I could run to the faster golf cart and leave Bob, Jimmy and DW stranded. I started to sneak out of the trees and then I sprinted, while laughing hysterically, to the fast cart. I jumped in and slammed on the gas just as DW realized what was going on. He ran after me the golf cart barely eluding him. He ran faster but I was getting away. All the while I cackled and laughed at this coup.

I’m rarely sneaky, nor am I fast enough to better my slimmer opponents and this was a real triumph for me.

Later that day I played a couple of rounds of basketball. The first game Bob and I lost miserably to JJ and DW, but the second game I got JJ and he and I defeated Bob and DW. Once again I was delighted in my victory. I’m horrible at basketball, but for once, I was actually doing okay. I was getting lucky, making a few good shots, and in general holding my own. When we won, barely winning 10 to 9, I was elated.

In the last 2 years a group of us has gone to Selah Ranch to spend time together and with Jimmy who is in town from China. All of us, with the exception of JJ, have worked at Kanakuk Kamps and have known each other for over 10 years. It is a group that has a close bond and there isn’t a single person at these trips that isn’t a constant delight to be around.

I think my favorite part of these trips is that for one weekend I get to be “one of the guys” and not just with any group of guys but with some of the coolest guys I know. Most of my time I spend working, working out, reading, alone at home or with my roommate and it can’t compare to what it is like to be surrounded by qaulity friends who love God and who have a common bond.

These trips always make the things of this world seem superfluous. One day I’ll be in heaven without the need to be attached to my Blackberry or my worldly possessions. I won’t stress about being married or having children on endless amounts of bills. Instead I’ll be playing basketball, Ultimate Catch-A-Lot, and riding in golf carts with people that I love.