Don’t let this serene beauty deceive you, things are not always as they seem…

We departed from Denton a little behind schedule (read 4 hours behind schedule). With 2 stops for gas and 1 stop for food, and an hour spent looking for a place to set up camp, by the time we settled in for the night it was 1AM.

The interesting thing about the ride up was the monstrously huge fire we could see in the distance when we passed through Idabel. Trees blocked most of fire, but the dark sky was lit up with orange and yellow and we drove through smoke for at least 4 miles. At the time it was very exciting, but not near as exciting as we would find out later.

Saturday morning I got up around 7:30 because I can’t sleep late no matter what. I went into the camper and everyone else was sleeping like Goldilocks and I was hungry for some porridge. I don’t like to be bored and so I decided to drive around and look at the scenery and hopefully find some chocolate milk – which I did and it was tasty. Later that morning we breakfasted and then later that evening we fished and then we got cleaned up and drove into town for some of the best Mexican food EVER!!

It was after the Mexican food dinner that I started to notice the first effects of what I now know was not just a simple forest fire but was really a nuclear explosion at a nearby testing facility. Never having been exposed to radiation before I thought that the itchiness of my skin was due t the fact that I had rolled in bunch of poison ivy, but it wasn’t. As you can see here Cody and Amy thought it was funny that their teeth were started to change, but only later did they realize that this change would be the least of their worries.

Other mutations followed, but the most frightening was the changes in the deer. The deer changed into mutant creatures with glowing eyes. They grew sharp teeth and chased us through the woods. The only thing that saved us was the insectile like appendages that had sprouted from our sides. We no longer had 2 arms and 2 legs, but 6 wickedly fast appendages that carried us swiftly through the forest and away from the deadly deer. The mutation spread throughout the forest. Fish swelled up to be the size of elephants, their huge eyes bulging in their reddened sockets. Birds squawked loud as their feathers turned bat-like and leathery and their beaks became elongated and pteradactyl-like. These exotic creatues made me wonder if perhaps the fire we had seen in the distance had not been a nuclear explosion, but rather the opening of the mouth of Hell. 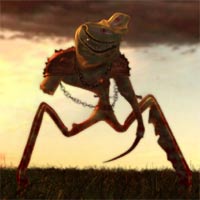 In the end, we all ended up on a vast plain with the sun setting in the distance. Discarded bodies heaped in piles around us. Crushed trees and detritus were scattered as far as the eye could see. I am sure that if Spielberg had filmed this finale, he would have paired the panoramic shots with melancholy music. The message would be clear – we were alive, but it came with a price.

Home now, I am here typing up this blog post with one oversized claw, huge mandibles, and the body of a praying mantis. The horrific details of Beaver’s Bend won’t quickly be forgotten and neither will the lingering smell of Up Dog. I will never forget the overpowering smell of Up Dog.