Ashley Angel Parker has a hit reality show on MTV called “There and Back” and it is about Parker’s journey from being in a boy band to trying to make it as a solo artist. The show, as far as reality TV goes, is actually pretty good. Parker is surfer boy pretty with his blond hair and chiseled features, however, like Nick Lachey, he isn’t a tool like pretty boys often are and that is cool.

His girlfriend turned fiance on the show, is outspoken and recently had their little baby boy and they named him “Lyric”. (What do you think about that name?) She is pretty and interesting, but she isn’t necessarily someone that you would pair up with someone like Parker. The show is actually one of the better shows MTV has on the air right now and so I recommend giving it a shot. Something about his girlfriend reminds me of Jes of Just Say Jes. Maybe it is her dark hair, or how loud she is when she speaks (ha ha I couldn’t resist Jes), but I really think that Jes and Roger should be on a reality show – that would be entertaining.

On to Madea’s Family Reunion

While in Waco I went to see this movie with Joe and Amber. Madea’s Family Reunion is very 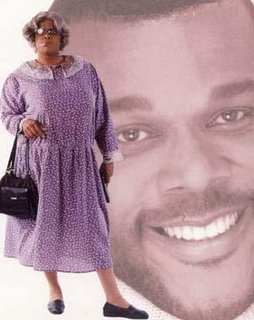 similar to Diary of a Mad Black Woman. The great thing about Perry’s movies is that he ties in so many life lessons. Lessons about forgiveness and second chances and standing up for yourself. The movie on the surface appears to be nothing more than a black comedy with yet another man dressing up as a fat black woman. I mean, hasn’t this been done before? Big Momma’s House, Big Momma’s House 2 and let’s not forget about the Nutty Professor with Eddie Murphy dressing up as 900 different people. However, this movie is indeed different. It is more than just entertainment, it is entertaining education. Go see it.

Did you just cringe a little when you read that title? Well, if you went to see them movie then I know you did. I thought it would be fun to go and see by myself just to see if it was a little bit funny. There are a few good laughs, but there are some parts that are so disgusting that I had to cover my eyes and plug my ears and hope to God that I didn’t need to use my popcorn bag as a vomit bag. In one particular scene a girl is popping a huge zit on her face with pliers and when it explodes she is flung back so hard that she slams right through the wall in her bedroom. This was actually less gross than some of the other scenes. So yes, I wasted$7.50 because I got up and left about 45 minutes into it. So next time you see my truck and you see money flying out the window, it is because I LIKE to throw money out the window.

I have picked Paris Bennett to win. There are a lot of talented singers this year, but this young girl has got to have the best voice out of them all. Mandisa has a great voice too, but her name is a shame. Her momma needs to be slapped. Mandisa! Or is it spelled Mandeesa? And why not just go by Mandy?