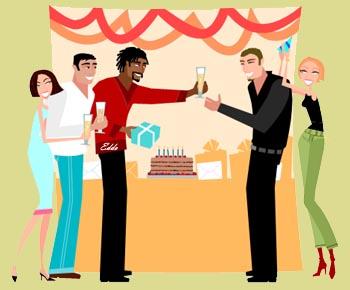 Last night we had a blogger game night at my house. Amstaff Mom and her husband Jeff came to the game night and it was really fun because she is the first person that I have ever met online that I have actually liked in person. She also did not come to my door with an AK-47 and a dozen roses like the last girl I dated from E-Harmony did. Thanks Amstaff Mom for leaving your weapons of mass destruction at home.

Something A.M. did bring was a surprise birthday cake for her husband Jeff. Jeff didn’t talk much at the beginning of the evening which is understandable because KT and Jessica were there and when you get the two of them in a room, well, how do I put this nicely… it’s like trying to talk over two people having a conversation through a drive-thru megaphone.

So Jeff wasn’t talking much and then A.M. had this birthday cake for him and we started singing happy birthday and I said his name wrong really loud. I was all, “HAPPY BIRTHDAY DEAR BRIA…” and everyone else was saying “Jeff” and I felt like a big dumb animal. However, in my defense he is a white guy and I know a lot of white guys named Brian.

It actually ended up being a really good belly laugh for everyone and for the rest of the night we called Jeff – Brian.