I titled this new design after a Bruce Lee movie – one of his better ones I might add. Growing up I remember my first Bruce Lee movie, I don’t recall the name, but I do remember this guy chasing Bruce, and a group of Bruce’s Posse, up a hill and one by one he was killing off the posse with this thing that looked like Saturn cut in half. It was literally a shiny steel bowl with a ring around it and a chain attached to the top. When he threw it, it would soar through the air and then if it landed on your head it would saw off your head with these internal blades, and then the guy would pull the chain and pop! the head would come off. It sounds gruesome, but they showed very little blood back then and it seemed more cool than gross at the time. Sometimes when I am driving I wish I had one of those devices- I would hurl it right through the back windshield of the person that cut me off and then pop! there goes their head! I would feel disturbed and upset about my actions later, but at the time spurred by righteous indignation I will have felt triumphant, if not down-right giddy. 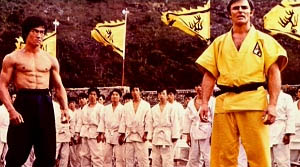 The Chinese Writing on the left says “Posted Note” in Chinese

Some people have been curious about the Chinese writing and what it actually says, well, I went to babelfish.altavista.com and typed in Posted Note and had it translate it into Traditional Chinese, it actually had the option for simplified Chinese and Traditional- very cool.